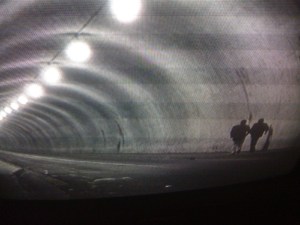 TALK ABOUT GOING way-back on the way-back machine. If John Cassavetes had made a film about L.A. in the late 50s/early 60s it would have looked like this. Gorgeous film footage of Los Angeles in early 60s. The Exiles follows a group of Native American exiles in Los Angeles for one night.
Synopsis/Backstory from the film website:

THE EXILES chronicles one night in the lives of young Native American men and women living in the Bunker Hill district of Los Angeles. Based entirely on interviews with the participants and their friends, the film follows a group of exiles — transplants from Southwest reservations — as they flirt, drink, party, fight, and dance.

Filmmaker Kent Mackenzie first conceived of The Exiles during the making of his short film Bunker Hill—1956 while a student at the University of Southern California. In July 1957, Mackenzie began to hang around with some of the young Indians in downtown Los Angeles. After a couple of months, he broached the subject of making a film that would present a realistic portrayal of Indian life in the community.

Mackenzie spent long hours making friends and earning the confidence of these Indians who finally agreed to re—enact a scenes from their lives for this picture. All of the actors, some of whom were recruited on the spur of the moment during the shooting, play themselves in the film.

The Exiles was directed and photographed by a group of young filmmakers — Mackenzie’s college mates, fellow employees, and friends holding down a variety of day—to—day jobs in the motion picture industry. Much of the picture was shot on “short ends,” the leftovers of 1,000—foot rolls (varying from 100 to 300 feet of stock) discarded by major film producers.

In collaboration with cinematographers John Morrill, Erik Daarstad, and Robert Kaufman, the shooting of The Exiles began in January 1958 and the first trial composite print was privately screened in April 1961. Premiering in the Venice Film Festival that year, the film received acclaim from many critics but tragically never found commercial distribution.

It was Thom Andersen’s compilation documentary Los Angeles Plays Itself which kicked off the rediscovery of this lost masterwork. Andersen contacted the daughters of Mackenzie to receive permission to use footage to illustrate the lost neighborhood of Bunker Hill. Although the original negative and fine—grain (interpositive) existed for the film, it was decided that a theatrical distribution of the film could put the materials at risk. So Milestone, in cooperation with USC’s film archivist Valarie Schwan, brought the film to preservationist Ross Lipman and the UCLA Film & Television Archive.

Milestone who distributed last year’s critical and box office hit, Charles Burnett’s Killer of Sheep, is releasing the restored version of The Exiles, premiering July 11th 2008 at the IFC center in New York